There is an area of the BC coast roughly centred around Johnstone Straits that has been described as the “Serengeti of the Coast” for its abundant wildlife values.

To visit during monsoon season is a special treat, as the real coast, now devoid of summer people,

reveals itself slowly, emerging  from low lying mists and bands of rain. Mountain tops lie shrouded in cloud, and headlands  and islands appear suddenly out of the gloom.

We tied up briefly by the boardwalk  at Telegraph Cove, in order to take aboard an elemental force of nature – Jackie Hildering, a fierce spark plug of a woman- naturalist, raconteur,  marine detective, environmental evangelist, and full time whale whisperer. She guided us to a nearby sweet spot, -a confluence of tides flooding into Blackfish Sound, where we cut the engine and drifted on the tide, as the humpbacks converged around us, intent on feeding, and quite oblivious to to our boat.

I had never seen so many humpbacks- at least 6 in close proximity, with telltale sprouts on the misty horizon confirming the presence of many more in the Sound. Jacky knew them all by name -look, she shouted -” there’s  Cutter, Ridge,  Slash,  and Twister and over there – Slash’s calf,  Moonstar.”  We felt like we were being personally introduced to each whale, and I guess we were, as we learned something of each of their histories.

Like most who use the waters of the BC coast as their playground I have been casually aware of the resurgence of the Humpback for some time, since every year on the water  we seem to see more of them. It is, at first blush, a feel good story – a triumph of conservation. Simply leave them alone, and stop harpooning every one you see, and pretty soon, their numbers rebound.

But things are not always what they seem. In the 24 hours she was aboard , Jackie imparted a stream of  information (at fire hose velocity) concerning her beloved whales. She can distinguish individual whales  in part from cataloging the unique shape of their dorsal fins, but also, sadly, from the pattern of scarring they exhibit- scars received escaping from fish nets.

I was astonished to learn that fully 50% of  the humpback whales on the coast bear evidence of net entanglement, or worse, collision with watercraft of all types. Whale mortality from these encounters is rising at an alarming rate based upon the evidence we have, but we can’t know the real mortality rate, as most deaths go undetected. Only rarely do carcasses wash up ashore.

Indeed, even as we drifted on the tide line, enthralled by the spectacle of whales surrounding us, swirling and lunging at bait fish, sounding, surfacing and occasionally breaching, a purse seiner appeared from around the point and began setting its net, equally as intent as the whales upon harvesting  the young chum salmon. We held our breath as whales sounded all around the seiner, some in dangerously close proximity. 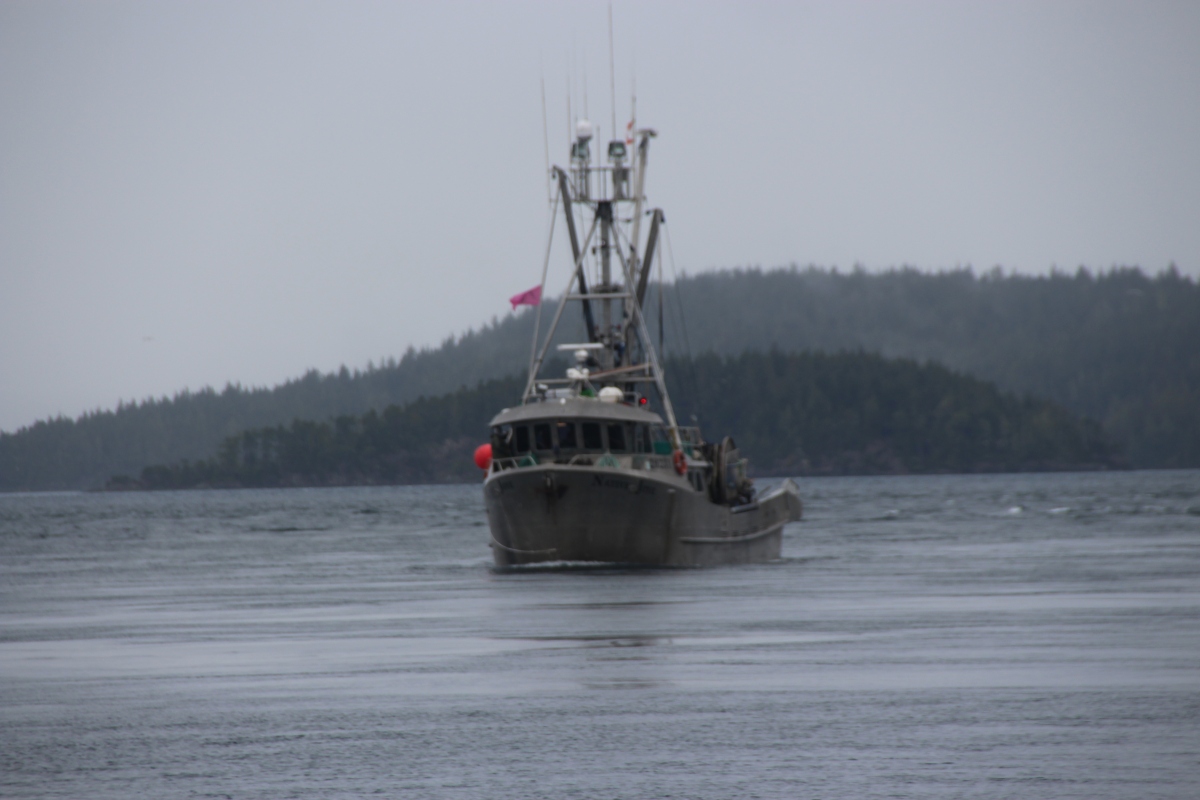 Whales, we learned, are oblivious to nets in the water. They are unable to discern a net, or even a mooring line, and often seem to pay scant attention to boats. Fast moving power boats are a particular concern, the whales being unable to  judge their speed and course.

The resurgence of the Humpback then is not quite the ‘feel good’ success story I had thought. Their recovery is still a fragile one, and, as their numbers increase so too does their vulnerability to human carelessness. Net entanglements and vessel strikes are not only  fatal to whales, they are expensive and dangerous for the humans involved as well.

Jackie, and a handful of like-minded friends, have taken action, forming the Marine Education and Research Society to provide both solid scientific research, and public education. They are determined to spread the word amongst the boating population that much of the damage now being done to the whales can be mitigated with just a modicum of common sense. The Society’s motto, which they are publicizing around the fishing fleet, as well as in the pleasure boating community is “SEE A BLOW- GO SLOW!”

I returned from Johnstone straits rejuvenated, and with a deeper reverence for our marine ecosystem, but also with a sense of obligation to tell others about the dangers of net entanglements and vessels strikes to our humpbacks. So, if you have read this far – please- if you are a boater, for goodness sake slow down when there are whales in the area, and boater or not – consider a visit to the MERS website – they are a worthy cause and deserve a donation.