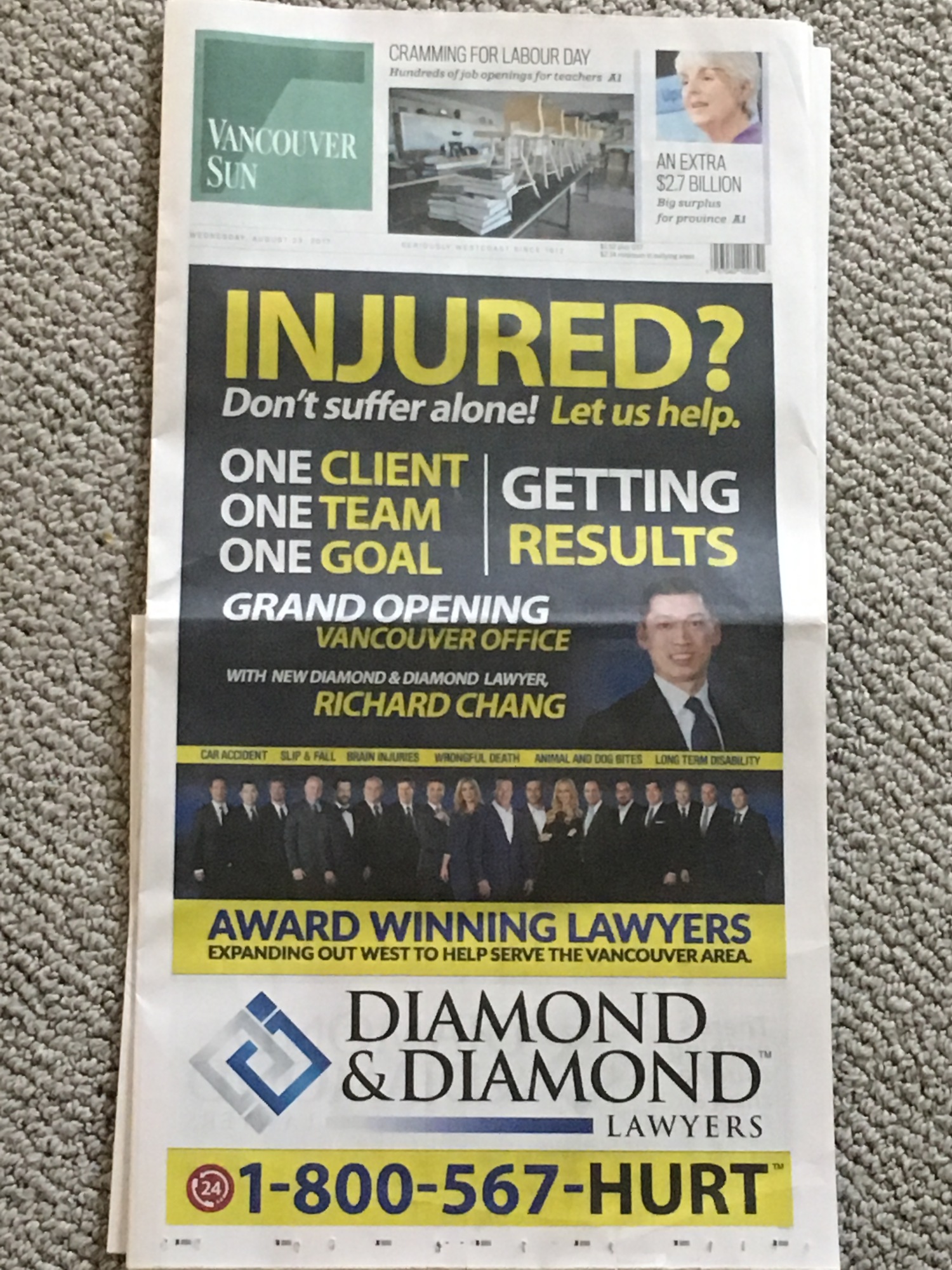 If you have been out and about around Metro Vancouver over the past several months it can’t have escaped your notice that there is a personal injury law firm that really wants your business. Their ads are plastered over every third sky train car, and you can’t make it through a local news cast without viewing an advert featuring a smarmy guy in a suit talking about justice for injury victims. Their name is Prezler law, and when I saw their saturation marketing campaign my first reaction was “Who are those guys?” You see, both my bride and I have been in the law game in the lower mainland for the past 40 years, and neither of us had ever heard of them. New firms form daily, of course, but none with pockets deep enough to fund an over the top marketing blitz.
Dong a bit of digging, I discovered two things. Firstly, the smarmy pitchman in the well-tailored suit isn’t Prezler, in fact, he isn’t even a lawyer. He’s an actor. Secondly, Prezler is a well- established Ontario law firm. They have been around for decades, and have obviously done well for themselves practicing personal injury law there.
Curious, I thought, that a specialty firm from another province should target British Columbia. I mean, its not as though we were short of high profile personal injury lawyers around here.
While still shaking my head over the puzzle, my morning Vancouver Sun arrived, and I was treated to the spectacle of a full front page advertising wrap, announcing the grand opening of Diamond & Diamond, another Ontario personal injury firm with money to burn on marketing. Let’s face it buying the front page of the Vancouver Sun ain’t cheap (but them neither is ad-wrapping a Skytrain car )
So, what’s up with this migration of litigators- the gunslingers of the profession?
Well, one of the first things I learned in law school was “follow the money”. These aggressive law firms haven’t descended on the province becase they like the scenery- they are her to pick ripe fruit. My guess is that word has gotten out that the pickings are good here in Lotusland . ICBC it seems, is a cash cow, flailing around in the water, and bleeding profusely.

And now comes a stern faced David Eby, our newly minted Attorney General, to announce stiff new auto insurance premiums. Pity he didn’t bring a bandage to the news conference, because raising rates is truly only a band-aid solution.

One of the first things I was taught in Law School was “follow the money” , and that, evidently  is what our learned friends from Ontario are doing, Either the word is out that  the BC courts are handing out  very generous awards, or that ICBC is a soft touch when defending. Either way, the sudden appearance of these eastern lawyers should tell us that it is time for a serious  re-think of how we compensate the victims of  motor vehicles crashes. Our present system is leaving too much blood in the water .